After last weeks debacle, I had no idea whether the queen was in the bottom box, were she should be, or in the top box.  I had hoped to inspect last Friday (day 5 of Snelgrove Method 1) but the temperature was only 9 degrees with a cold wind so it wasn’t possible. I assumed/hoped she was in the bottom box and just adjusted the Snelgrove board exits as per the instruction.

Sunday was a good day to inspect because if the queen was in the bottom box, we could carry on as per method 1’s instructions.  If, by accident, she’s in the top box, we could swap to using Snelgrove method 2 as Sunday was day 7 of that plan.  Method 2 requires the queen to have been in the top box for the last 7 days and then moved to the bottom box. The schedule is then re-set to day 0 of Snelgrove method 1.  Are you following?

We inspected the bottom box and found no eggs but there was a queen cell. No eggs meant the queen wasn’t there and must be in the top box. I destroyed the queen cell because no eggs had been left in the bottom box last week and any queen cells would have been made for larvae which would produce a poor queen.

The pressure was now on to find the queen and put her in the bottom box once and for all.  On our first pass through the frames, looking carefully, we couldn’t see her. Lots of worker bees and drones but we just couldn’t see the queen. On the second pass through, I was beginning to loose hope when, on the second last frame, there she was! She was moving fast but we managed to cage her, mark her and put her, finally, in the bottom box with a fresh frame of brood.

The top box is now definitely queenless and has all the brood frames. I double checked the frames and there were very small eggs so this box should be able to raise a new queen from those eggs.

Hive Rebecca is now back to method 1, requiring a Snelgrove board exit change on day 5 (Friday). I will need to inspect the bottom box and destroy any queen cells and I should hopefully see queen cells in the top box. Fingers crossed!

Other news, Hive Caitlin is doing well. It was busy with bees and there were no queen cells. Under normal circumstances, queen cells are a sign the hive is getting ready to swarm. May, June & July are the main swarming months, so regular checks need to be carried out and remedial action take if any are found.

The hive is on a brood and a half (brood and super) which I’d prefer wasn’t the case. I smoked heavily, to force the queen down and added a queen excluder between the brood and the super. Hopefully, she’s gone down and at the next inspection, all the eggs will be in the brood box. Encouragingly, the bees have started to draw out comb in the upper super. Hopefully they’re maybe thinking about filling it with honey! 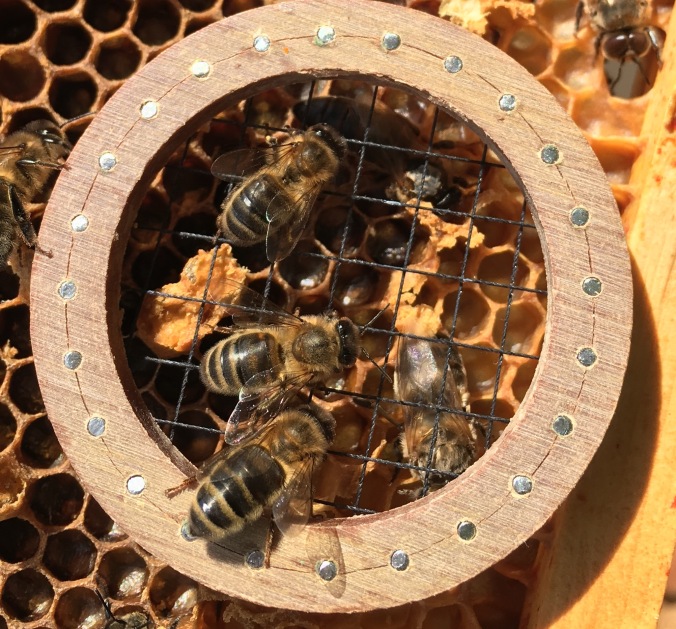 Queen under cage at the top 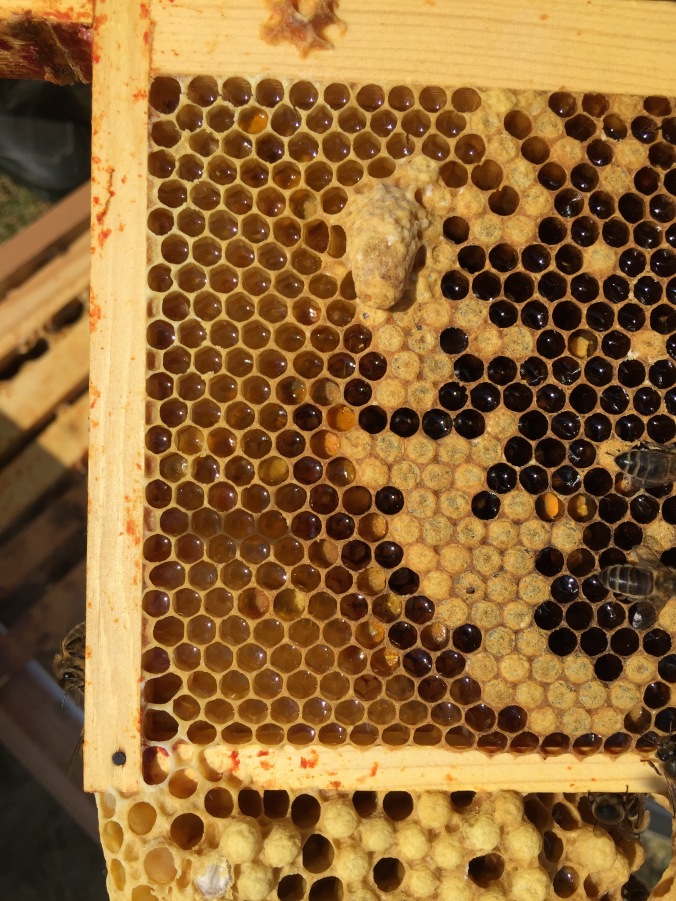