I posted a help question on The British Beekeepers Association FB page asking if there was anything else I could do to prevent wasps getting into the hives and surprisingly, adding a porch extension is the recommendation.

Off we want to B&Q yesterday to buy some plastic roofing. With scissors and drawing pins – voila – bee porches! 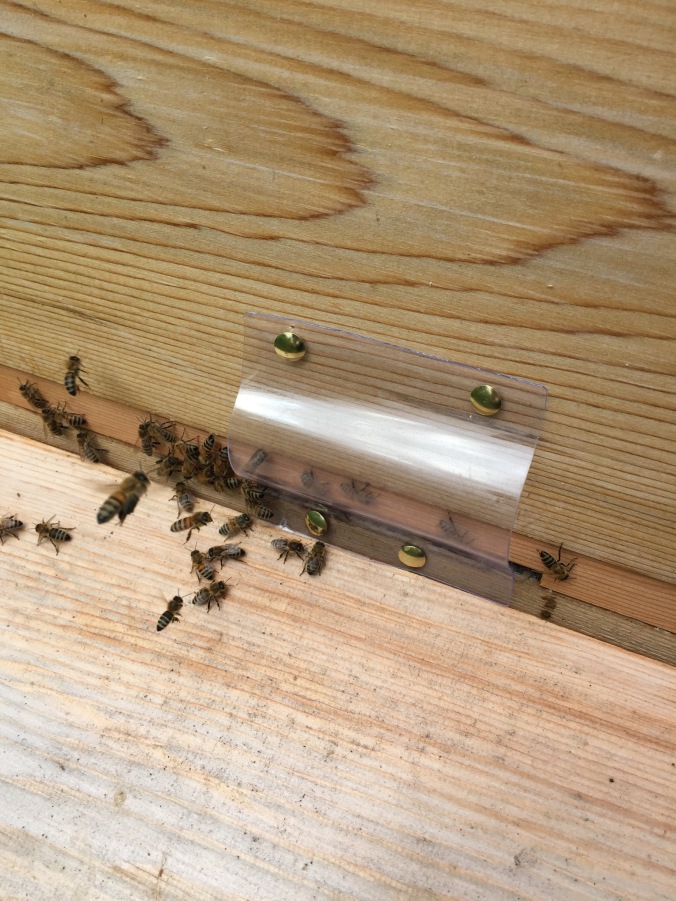 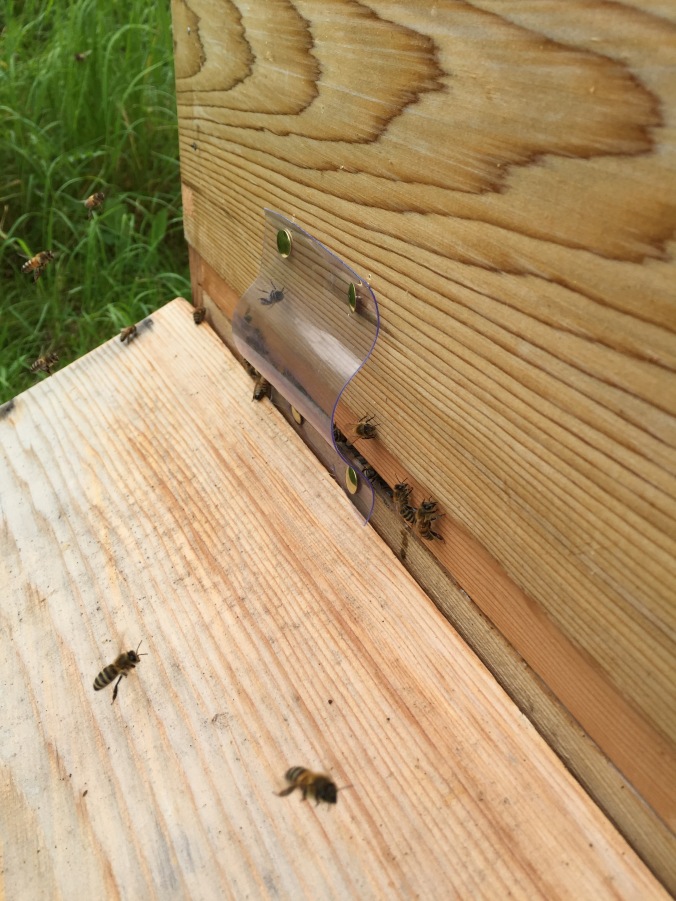 The idea is that the bees will quickly work out the new tunnel entrance but the wasps find it more difficult. It’s also an easier and smaller area to defend.

There were still wasps close to the hives but they were definitely scavenging for dead Drones. Hopefully the porches will prevent them getting more ambitious and trying to get into the hives.

The wasp traps I set the other day have had some success and I’ve also put up a Waspsinator. Apparently wasps don’t like entering the territory of another wasp nest.

We were at the apiary this morning and noticed a considerable increase in the number of wasps and, worryingly, some were trying to get into the hives.

At home, I made some wasp traps with used plastic drinks bottles filled with jam and fruit juice. I returned this afternoon and positioned them around the apiary. I closely watched all the hives and, although most hives had some wasp activity near them, the hive with the most activity was Claire in Hive 4. This surprised me because it’s the strongest hive and I would have assumed they’d have attacked the weakest – so I watched some more…

Claire in Hive 4 is still throwing out Drones. It’s vicious! Bees are attacking & physically expelling the Drones who are desperately trying to get back in. The wasps seem to be hanging around waiting for the Drones to be killed or weakened & then going in for a feed! I know Wasps are scavengers and will eat other insects but it’s all a bit gruesome!  Apparently they like to take the thorax of bees back to the nest as it’s the ‘meat ball’ i.e. the flight muscles!

I’ll pop back tomorrow and check the hives and traps. I hope the hives are strong enough to cope as there isn’t much else I can do!

bee throwing a drone out

bee fighting with a drone 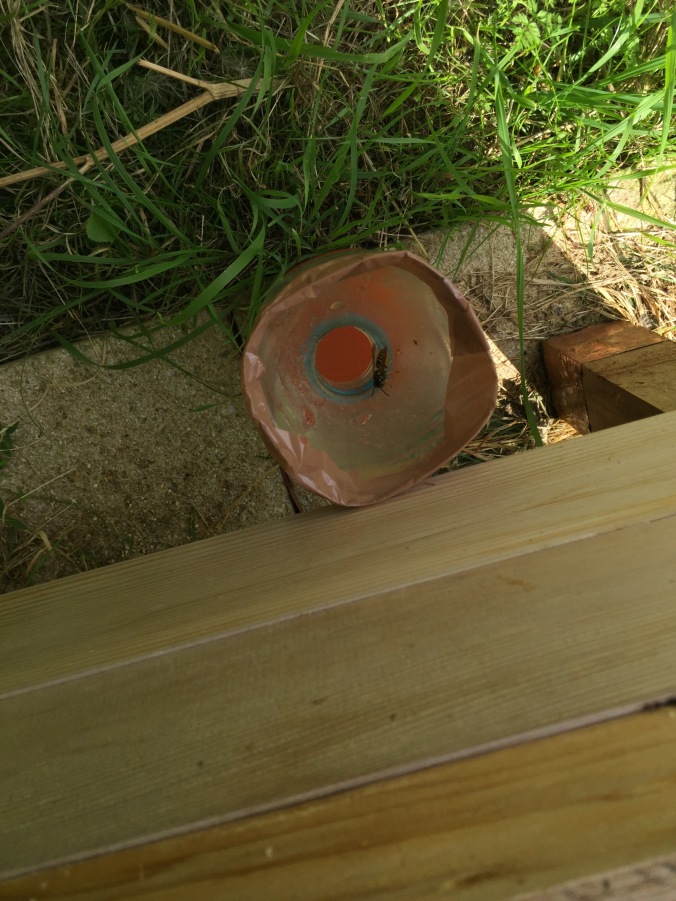 We inspected the apiary today and all was well.  Caitlin in Hive 1, Rebecca in Hive 2, Sam in Hive 3, Claire in Hive 4 and Susan in Hive 6 were all doing well – eggs, larvae, brood, queens spotted and no sign of disease. Sam in Hive 3 and Claire in Hive 4 were particularly strong with brood over 7 or 8 frames, the other with brood over 3 to 4 frames.

It was interesting to watch Claire’s workers in Hive 4 throwing out the Drones. It’s the first time I’ve seen this happen. Three Drones were being thrown out so it must be getting to that time of year when the men are no longer required and therefore will no longer be tolerated in the hive – interesting!

I also witnessed a bee attacking a wasp that was trying to get into the hive. Fortunately, it was the only wasp about and I’m hoping that this year, I won’t have a wasp problem.

Hope in Hive 5, which you may remember was queenless, had some larvae!  Initially I was very excited – there must be a laying queen! However, in retrospect, I didn’t see the queen so I’m wondering if it’s a laying Queen or a laying Worker? At the next inspection I’ll need to see how good the brood pattern is and then I’ll hopefully be able to tell. I’m still hopeful for Hope!

The amazing thing is that the bees in the apiary are changing.  If I’ve understood the genetics then:

Rebecca in Hive 1 was my original hive that I brought through the winter – it had mongrel bees with a dark striped abdomen.

Caitlin in Hive 2, that I bought in April, also had mongrel bees with a dark striped abdomen.

Claire in Hive 4 and Susan in Hive 6, the two nucs I bought in May, had mild Buckfast bees with a golden orange colour abdomen.

However, due to various manipulations and splits, Caitlin in Hive 1, Rebecca in Hive 2 and Hope in Hive 5 all now have queens which originated from Claire in Hive 4 – the mild mannered, beautiful golden orange coloured Buckfast bees. Even the Queens look similar – long and orange! Susan in Hive 6, although not the original Buckfast nuc queen, is derived from a queen cell from that queen. It is only Sam in Hive 3 which is from the original overwintered dark striped mongrel stock.

How interesting (or maybe it’s just me that thinks this?) – now I have 17% mongrel bees and 83% Buckfast bees! 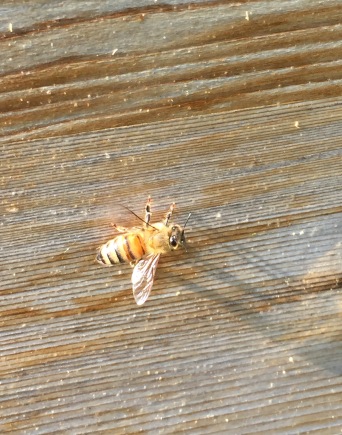 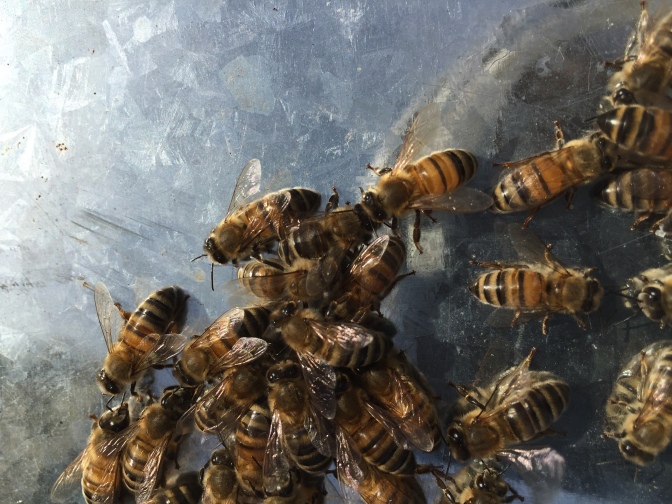 With a honey super in the kitchen waiting to be extracted, I have some angry bees trying to get in along with this beauty. It’s a Horntail or wood wasp.  I’ve released it into the woods and I’m hoping it doesn’t come back! 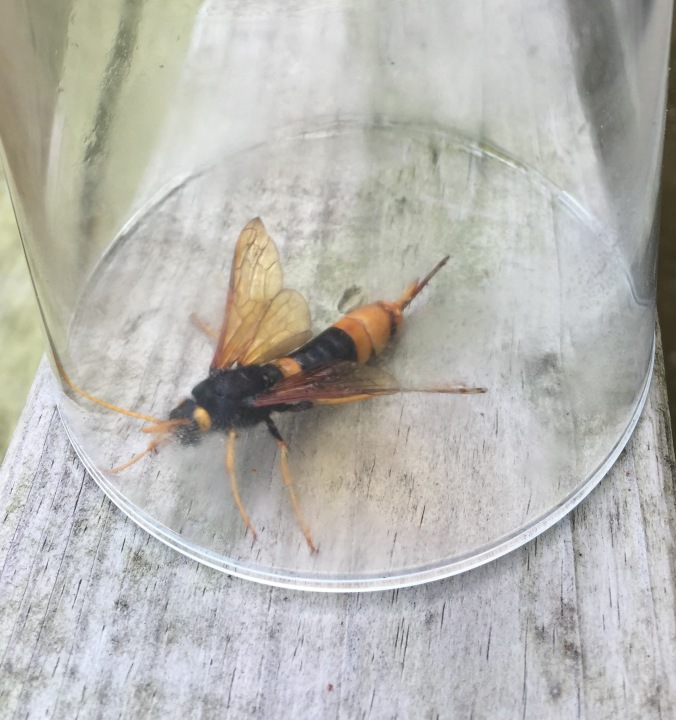 Between the weather being changeable and a busy schedule we hadn’t managed to inspect the hives since the end of July. So, we were pleased to find that we still had 5 queens but this time, all 5 queens were laying. That’s a fantastic result!

Caitlin in hive 1 was a small colony but amazingly docile and with a nice laying pattern.

Rebecca in hive 2 and Susan in hive 6 were the two hives that queens had been spotted but hadn’t started to lay. This time, both had larvae & brood so that was fantastic. However, hive Rebecca was vicious and Stuart and I got stung several times on the hand. Hive Susan was small & docile.

Sam in hive 3 was enormous! A mass of docile fluid bees with larvae & brood.

Claire in hive 4 still had it’s blue queen and a nice laying pattern.

Hope in hive 5 had no sign of the queen cell spotted the last time. There was no brood and I didn’t see a queen. There is still time for a queen to be mated & start to lay so we’re going to give this hive another few weeks and if nothing is forthcoming, we’ll merge it with one of the smaller hives.
It was lovely to see that each hive had a beautiful array of different coloured pollen and there was the possibility of a little more honey before they, and us, start to  prepare for winter. 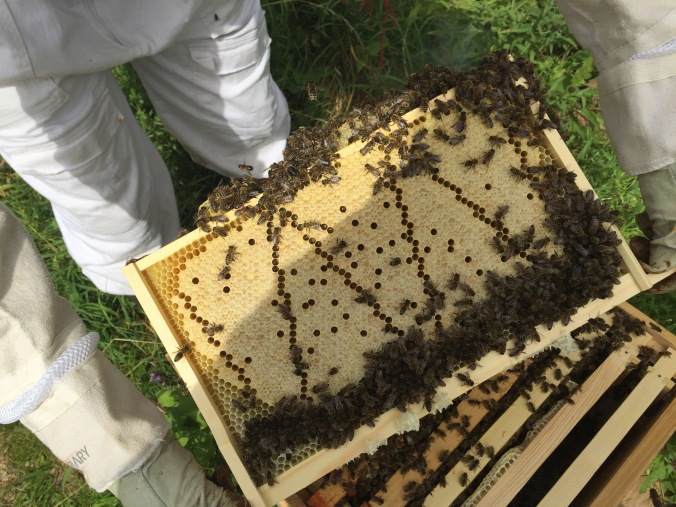 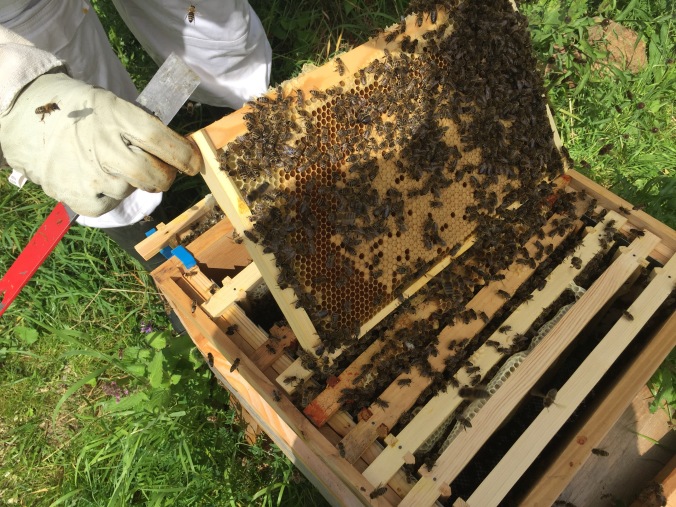 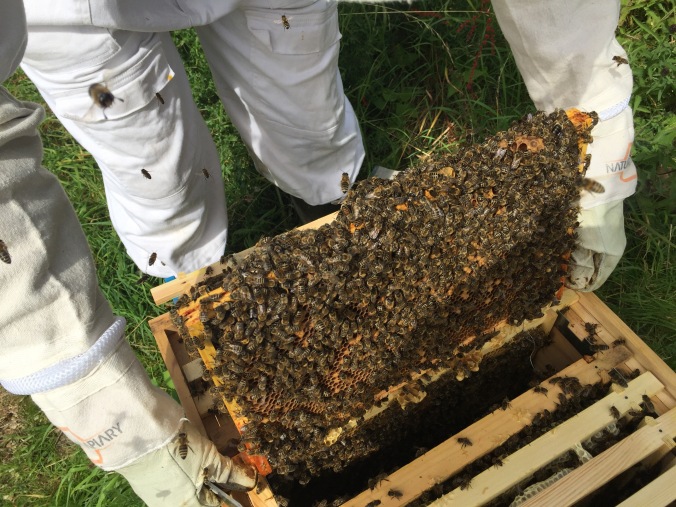 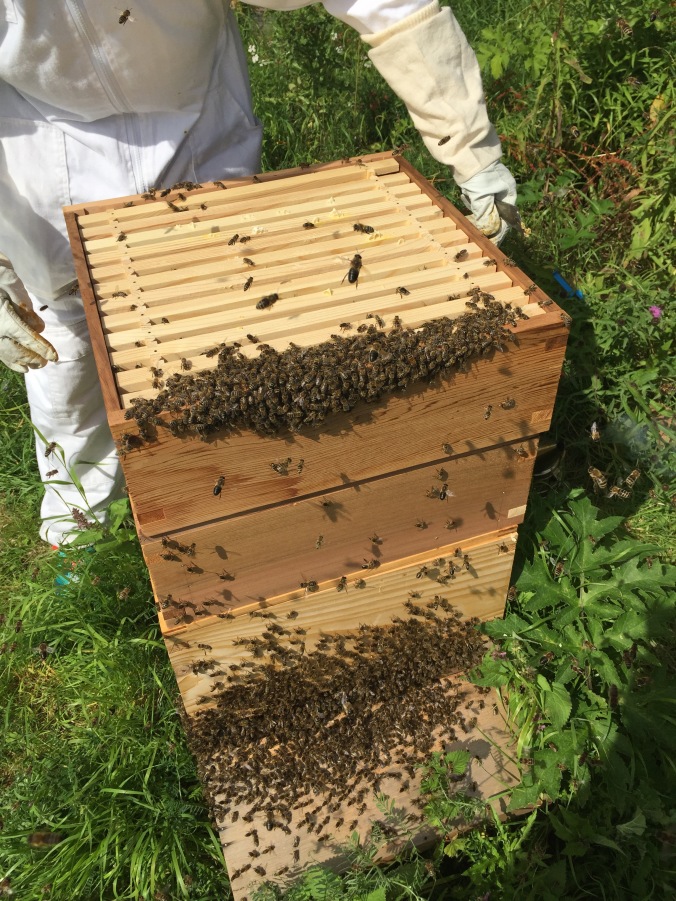 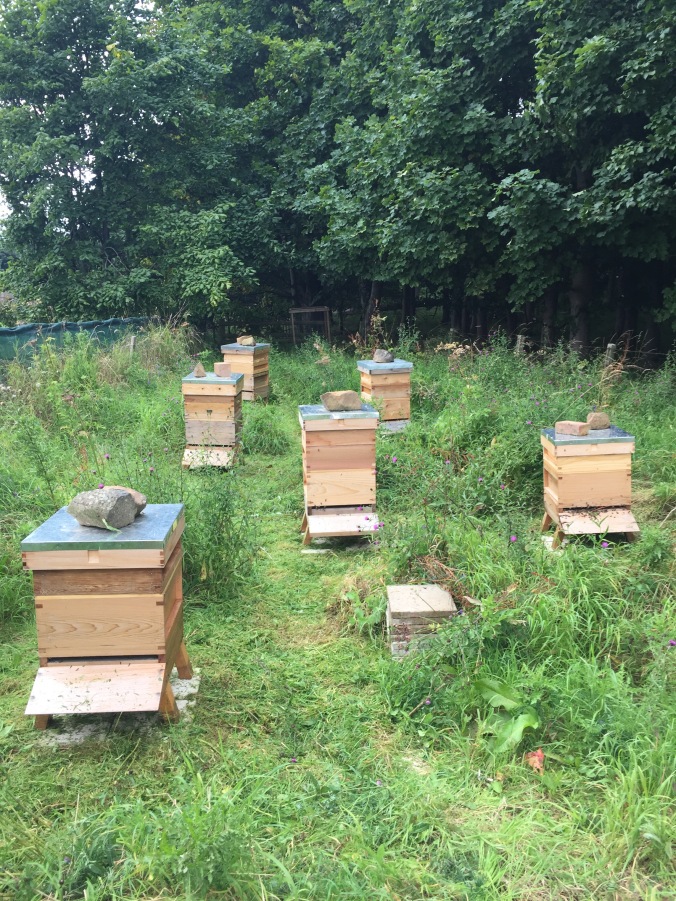