Walking past the bees on this lovely sunny day, it was a delight to see them flying and bringing in Pollen. A short distance away was a carpet of snowdrops providing both a Nectar and Pollen source on this early spring day when other food may still be very hard to find.

According to the Astronomical Seasons, based on the the position of Earth’s orbit in relation to the sun and taking into account equinoxes and solstices, Spring officially starts on the 20th of March 2016 and ends on the 19th of June 2016!

However, this is rather complicated and varies year on year, resulting in the introduction of the Meteorological Calendar. This is used by the Met Office and splits the calendar into four seasons of approximately the same length. The seasons are defined as Spring (March, April, May), Summer (June, July, August), Autumn (September, October, November) and Winter (December, January, February).

So Tuesday 1st March, according to the Met Office, is officially the start of Spring.  Yippee – longer days, bit more sun, snowdrops, crocus and soon daffodils. The bees have survived the long hard winter and I can sigh with relief – or not! According to the ‘bee books’, more colonies die out in March than in any other month. This is due to the fact that the bees have exhausted all their stores surviving winter, and now starve because they have nothing left to build up their colony.

With this cautionary tale, I took a quick peek in the hive today to see if the bees had started to eat the fondant I had left over the feed hole back in December. And yes, they have! Munching away happily right inside the bag. I’m amazed because back in October I had left them with a brood box full of stores – more than the recommended over wintering food store. The bee community has been concerned that such a mild winter would interfere with the usual stores management. I think they’ve been right to be concerned and that the milder weather has left the bees more active, more hungry and using more stores. I’ll check on them weekly and see how much they’re taking down and add more fondant when required. The only thing I can’t work out – if they’re inside the bag eating the fondant – how do I change bags? Answers in the comment box please!

As some of you may know, I was asked to relocate my hive due to the refurbishment of Hungary House and surrounding grounds, which will become residential. Although this was an initial blow, the Estate very kindly suggested I might consider alternative locations within the Estate and to have a look around and identify what would work for us both.

Having found and agreed a site, I just needed to move the hive – easy? Not so much! You may remember the rule to moving hives – under 3 feet or over 3 miles!  I was going to be moving the bees less than a mile as the crow flies. Time to consult the books and quiz my fellow beekeepers. As luck would have it, if you need to move bees less than 3 miles then the best time to do it is in the winter. As they’re not flying much, their sat nav isn’t set in stone. Theoretically, if they haven’t been flying for a few days or maybe even weeks in a cold period, once they emerge they’ll orientate themselves again, so a new site will be orientated automatically.

The next question, how to move them?  This one had me stumped for a while. Moving in winter reduces the risk of the bees returning to the old site but it increases the risk of them being bumped out of the cluster, chilling and dying. The less bumpy the ride, the less likely they will chill and die. My fellow beekeeper, Clive, kindly offered me his homemade hive ‘sedan chair’ to carry the bees to the new site. Stuart and I decided we’d do this by the end of January.

Where to move them was agreed, how to move them was decided but when to move them? The weather never seemed right, the path to the new site was very muddy and we were worried we’d slip and potentially drop the hive, I had the opportunity to treat with Oxalic Acid and doing this and moving them might put too much stress on the bees, I hurt my back so the possibility of carrying a heavy hive a mile seemed risky and finally Stuart was ill with the cold!  Frankly, any excuse because it was a scary thing – to move my only hive, my girls – so much could go wrong!

Time was marching on. February already! If it wasn’t done soon and the weather started to warm, I’d have missed the winter moving window. I decided today was the day, and we were going to move them by car!

So we closed the entrance, strapped the hive down, put it in the boot and drove, carefully, to the new site.  Once at the new site, we carried it a little distance, over a fence and onto the prepared ground. It looked good! I opened the lid to check all was well and the bees were still alive. They’d been bumped out of cluster but hopefully they’ll settle down quickly. I placed the food back over the feed hole and left the entrance closed so that, after being disturbed, they wouldn’t pile out and die in the cold. I’ll go back tomorrow and open the entrance, placing some branches over the entrance to emphasis the fact it looks different. I’ll also move and re-install the ‘woodpecker protection unit’ and add some wind screening. 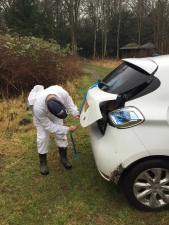 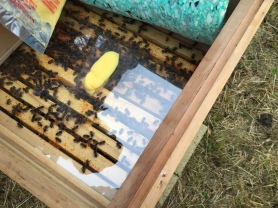 Out of cluster but alive. 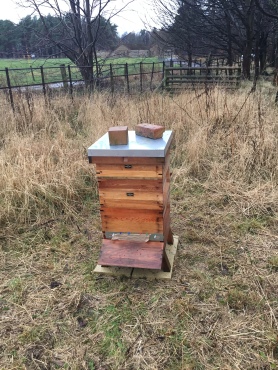 New site, entrance still closed.
I cannot tell you how amazing Stuart was at driving the little Zoe down the very muddy field path to Hungary House and back. As he says, when we come to trade it in, I don’t think we can say we haven’t done off-road rally driving in it anymore!  Gings – slipping and sliding, how he managed to save us on that last slide. I thought us, the car and the bees were going to end up in the field!  Stuart admitted afterwards he had a text ready to send to all 4 wheel drive owners in the village to come and rescue us!

After worrying and putting the move off for for several months, it’s done and it looks like it’s all gone well. Thanks to the Estate for the opportunity to relocate within it’s grounds, thanks to Clive for his advice and the loan of his ‘sedan chair’ and thanks to Stuart for his rally driving, help and support.  Hopefully the bees will be happy in their new location!