It’s taken me almost two weeks to write this post as we’ve had a bitter sweet start to the season.

The sweet bit first!  Stuart and I inspected the three hives at Archerfield on Wednesday 18th April and were delighted to see eggs, larvae and brood with a growing colony of bees. All hives were very light on stores and two of them had sustained substantial losses as the floor of the hive was littered with dead bodies, but they’d survived the long, cold winter.  Knowing the area was surrounded with Oil Seed Rape about to flower and hoping for the predicted sunny weather, we put on the queen excluders and the first supers of the season. They’ve got the brood box to fill with stores first but at least we’ve given them space to grown into.

The following day we visited Gosford and found a similar situation. All but one hive had eggs, larvae and brood with growing colonies. My worries about the Polyhive not surviving the winter after the snow ingress were unfounded as they looked fine, it was Hive 2 which didn’t survive for some reason! All the hives have 2017 Queens except Claire in hive 4, which has the original blue marked Queen from 2015, and we were delighted to spot her in amongst the workers. As at Archerfield, some of the hives had sustained heavy losses and all were light on stores. The hives that were double brood, the bees were in the upper box with the lower box being empty so we swapped the boxes around to give them space to move up as well as adding queen excluders and a super to each hive. Some remedial work is required to swap out old comb for new but we’ll get round to that at the next inspection. Although the sun has been shining, there’s still quite a cold breeze so we’ll need to wait until it heats up a little bit more before we can get back in. Hopefully we’ve given them all enough space for the moment and kept swarming at bay!

All in all, a great result of ten surviving hives and only one loss. We were really pleased. 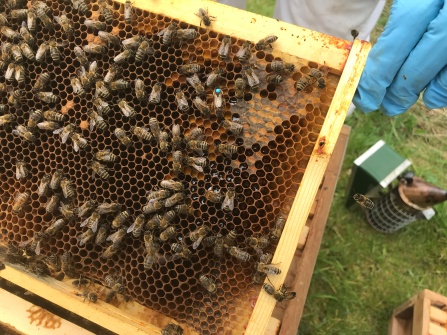 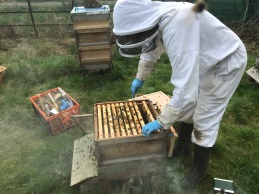 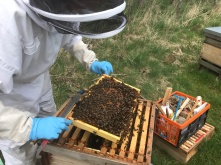 Now for the bitter bit! I unfortunately got stung on the finger. An occupational hazard as your handling frames with bees on them and one that doesn’t particularly bother me.  However, on this occasion I started to cough almost instantly, my sinuses filled, I began to sneeze and my ear canals felt like they were on fire. We finished up as quickly as possible and retreated to the car where I took 2 Piriton and 1 Piriteze. When we got home I wasn’t feeling their effects so I decided, with EpiPen at the ready, to take my ‘in case of reaction’ steroids. Stuart wasn’t happy and decided we’d make our way to A&E and should all the medication kick in, we wouldn’t go in, but if not, we were headed in the right direction. Fortunately, the medication worked and I stopped coughing etc. so we came home. However, it was unpleasant and unsettling. According to my retired doctor beekeeper friend and Google, this would appear to be symptoms of anaphylaxis and it’s not the first time I’ve had this happen. So this has put the whole beekeeping activity in jeopardy. I’ve got a doctors appointment this Friday to discuss if further but I’m pretty sure I’ll be told that there’s no way of predicting the future, that I’m probably at risk and it’s my decision whether to continue or not!

I feel really sad about all of this and have no idea if I’m over-reacting or not. However, the bees are carrying on regardless so Stuart has offered to carry out the manipulations with me supervising to try to avoid any stings until a decision is made. I’ll keep you posted!