My apologies for not keeping you up-to-date with the latest bee news!

We had our first opportunity to do a full inspection on 26th March when the weather was warm and sunny.  We were delighted to find Queens in all but one hive but that hive did have eggs and larvae so she must just have been hiding.   However, the hives were chock-a-block with stores, so full in fact, that there was no room for laying.  Extra room was required urgently to prevent early swarming from lack of space. We also removed the mouse guard as the warm weather would mean any furry friends would be happy in the fields.

To recap, in the Autumn, we made the decision to overwinter 4 of the most active hives as brood and a half (brood and super) to ensure they had plenty of stores going into winter.  The expectation was that they’d eat all the stores and have free space by this time of year to start laying and we’d split the empty, used super from the brood box with a queen excluder in the Spring. Unfortunately, we fed them too much leaving no space and the only solution we could think of was to add an additional brood box.  Many beekeepers work on double brood (2 brood boxes) rather than single brood, but it’s typically seen as harder work, has a higher chance of damaging the queen and produces less honey.  Note to self – don’t feed so much next year!

The other two smaller hives were wintered with just the brood box so they will remain as single broods.  Maybe an interesting experiment to compare and contrast.

Our opportunity to put the double brood box plan into action came on 1st April when again, the weather was warm and sunny.  Fortunately, we found Queens in 3 out of the 4 hives so we absolutely knew the Queen was down in the existing brood box when we added the additional brood box. The queen excluder was then added but then the dilemma, what to do with the full super? We decided to put the full super above the queen excluder in the hope that they’d move the stores down into the empty brood box.  We then added an empty super above to cope with the Oil Seed Rape flow.  We don’t know if this will work, time will tell.

The hive we didn’t find the Queen, we smoked heavily through the super which will probably have forced her down in the brood box.  We’ll need to carefully inspect the supers next time, just in case she’s up there, but we’re confident she’ll be in the brood box. 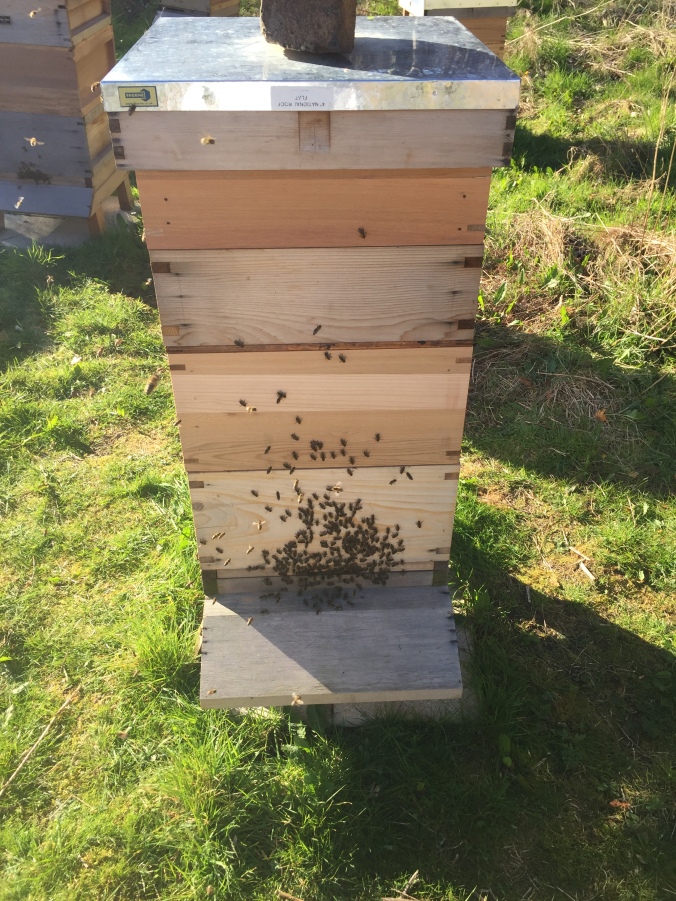 Unfortunately, that was the last of the sunny weather.  Since then, it’s been FREEZING!  The poor bees must be so confused.  I just hope that, having thought the weather was warming up, we haven’t chilled them by giving them more space and separating their food stores.

I stopped by today to have a look. It was only 9 degrees so way to cold for an inspection but I looked in the polycarbonate crown board and all but one hive had bees in the upper super.  All the hives had flying bees and all had bright yellow pollen going in, possibly from the Oil Seed Rape.  I can only hope the hot weather didn’t induce early swarming at the beginning of April and that the cold snap hasn’t chilled them.  The next inspection will be when it’s warm again – whenever that will be??

Today’s busy bees covered in pollen and guarding the entrance. 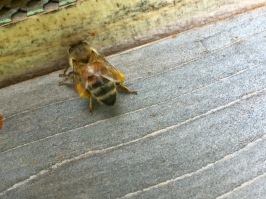 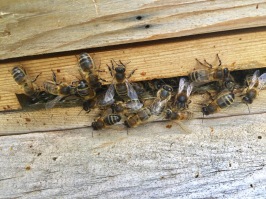