It was good to have my beekeeper friend, Sandy, to cast an experienced eye over both Hive Caitlin and Hive Rebecca yesterday.

Sandy confirmed what I thought at my last inspection, Hive Caitlin has brood and larvae and no obvious signs of disease. He also confirmed that most of the combs were old and needed replaced. As the comb is reused many times, the cell sizes become smaller and they harbour more diseases, making the hive less desirable and clean. I was considering a complicated comb exchange but I was worried that this would divert precious energy away from building up the colony. As there was no brood or stores on 5 of the old combs, Sandy suggested we just swap them with frames of drawn comb. So, as we left it, 2 of the original frames were fine, 5 frames of clean drawn comb have been swapped in which leaves 3 old frames containing the brood. These can be swapped out later in the season. Hopefully now, Hive Caitlin is cleaner and nicer for the bees. Our last job was to check the Varroa count board. There was quite a bit of debris but no signs of Varroa, so that’s a relief.

We managed to have a quick look in Hive Rebecca and the top brood box was teaming with bees. It had four frames covered with a decent size brood pattern and it had plenty of stores on the outer frames. The lower brood box also contained brood over 3 frames. A slightly smaller brood pattern but plenty of stores. This is a strong colony with no obvious signs of disease. I’d like to split this hive into two.  This would get rid of the double brood setup, increase my number of hives and prevent swarming. I need a plan and someone to help me find the Queen! 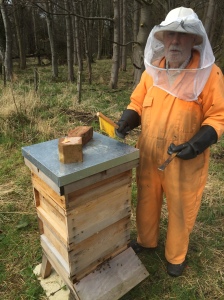 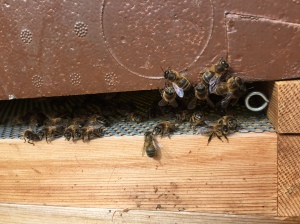