7th August was the big night – merge night! The reason for doing it at night was to ensure all the forager bees had returned to the hive.

Jessica was now right next to Hive Rebecca.  We opened Hive Jessica and sprinkled icing sugar on the bees. 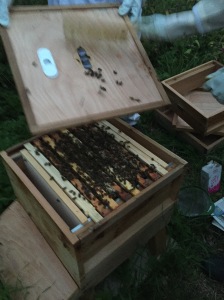 Bees don’t like bees from other hives.  They will attack and defend their own homes.  You can’t just add one to the other.  By sprinkling them with icing sugar it forces them to groom each other, thus exchanging smells.  The newspaper slows the meeting process because they have to chew their way through it in order to come together.  That’s the theory and we were hoping it would work! 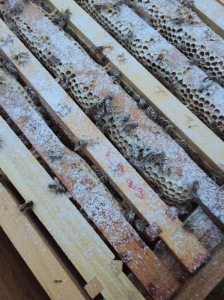 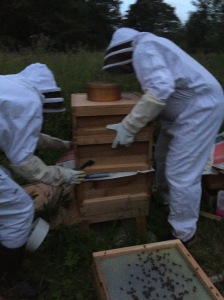 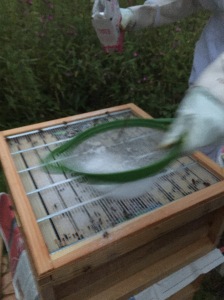 We did a full inspection 4 days later and it looked good. The bees had eaten away all the newspaper, groomed themselves clean of icing sugar and appeared to have accepted each other. The top brood box, which was queenless, was now full of stores for the winter and the bottom brood box had larvae & capped brood.  Hears hoping Hive Rebecca will be in good shape for the winter.